Every Day is Prime Day on Amazon According to eStoreMedia Analysis

Five-category, price and promotions study shows the number, and depth of typical Amazon discounts stand up to Prime Day promotions. 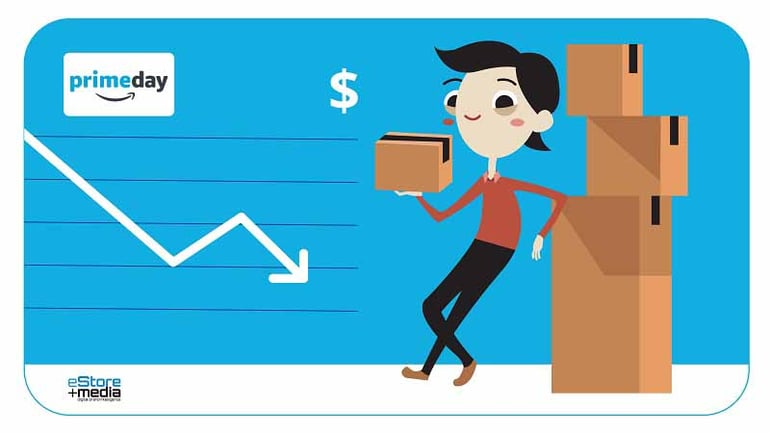 Despite the promise of massive Prime Day discounts, a month’s analysis carried out by eStoreMedia found average promotion depth, and the ratio of products on promotion leading up to July 15th were about the same as for the event itself. Even so, Prime Day is likely to help fulfill the retailer’s primary goal of swelling the ranks of its Prime membership scheme.

Billed as an international event, Amazon tweaks Prime Day promotions and product launches to align with priorities in each market. This year was Amazon’s fifth Prime Day, and the e-commerce behemoth emphasized marquee discounts such as 40% off its own brand ‘everyday essentials’ and 15% off fashion in the US. In the UK, banners highlighted 30% off the same ‘everyday essentials’ and up to 40% off fashion.

Promotions on electronic goods were heavily flagged on both sides of the Atlantic, with Amazon saying it was offering up to 50% off selected items. In the UK, the retailer focused on online grocery, offering £10 off £30 spent on qualifying items including selected beers, pet supplies, household products, confectionery, and personal care products – a promotion that actually runs to the end of August.

To understand what was happening in categories beyond those highlighted by Amazon, eStoreMedia analyzed price and promotion data across five categories:

The study covered the four weeks leading up to Prime Day, and compared it with data for the same categories on July 15th and 16th. The analysis focused on promotions delivering discounts above 5%. The data shows that for some of the categories at least, there was little difference in terms of the ratio of products on promotion, and the average depth of promotion before and during Prime Day – see below for more details.

Before and during Prime Day, Amazon adhered to its ‘limited deal model’ – with a limited number of deals, on a restricted number of products, for controlled periods – rather than discounting on a massive scale. There are pearls to be found, but discovering them isn’t easy, given Amazon’s scale and the sheer number of products available in each category.

However, this is a massive category on Amazon with over 75,000 products listed, which means the actual number of products on promotion (> 5% discount) fell significantly from 1,790 during the week of June 17th to 549 over the two days of the Prime Day event.

Out of the five categories analyzed Hair Cosmetics was least affected by Prime Day. The category also had the lowest percentage of products on promotion throughout the period of the study. For the four weeks before Prime Day, and over the two days July 15th and 16th only 1% of products were on promotion displaying average discounts of about 22%. Hair Cosmetics is another large category on Amazon with over 16,000 products listed.

The makeup category represented a case of swings and roundabouts for consumers. The percentage of products on promotion fell by about 1% between mid-June and Prime Day, but the average depth of promotion increased by just over half a percent in the same period to 26.83%, delivering the deepest price cuts of the five categories analyzed.

The Makeup category is more than twice the size of Hair Cosmetics, with about 35,000 products listed. The changes meant there were about 300 fewer products on promotion during Prime Day, compared with the preceding weeks.

Consistent with the push on high value items, and consume electronics in particular, the Television-category represented a win-win for consumers during Prime Day. The percentage of products on promotion was up by about half a percent to just over 9%, and the averaged promotion depth was also up by about 1% compared with three out of the four preceding weeks.

For the Washing Machines category, the pre-Prime Day analysis covered the first two weeks of July, but the results were consistent with data from other categories. The ratio of products on promotion fell slightly from 11.24% during the first week of July to just under 11% during the Prime Day promotion period. At the same time, the average depth of promotion increased slightly from just under 22% to nearly 23% in the same time frame. Compared to other categories in the study Washing Machines is relatively small with about 1,200 products listed. For this category, the average daily number of products on promotion throughout the study was 134.

Price is one of the most important factors in a shopper’s buying decision, but given the ongoing nature of promotions on Amazon, brands need to monitor their own, and competitors’ pricing on the platform, to ensure their pricing strategies are driving margin and growth.

Amazon.co.uk full-category, price and promotions data for this research was collected between June 17th and July 16th, 2019 using eStoreCheck, the leading e-commerce analytics solution. eStoreCheck’s Landscape feature provides real-time analysis across all products listed in a category to benchmark e-commerce essential metrics including Price and Promotions.