eStoreMedia’s analysis shows Huawei brand benefiting from barrage of spying allegations in US. 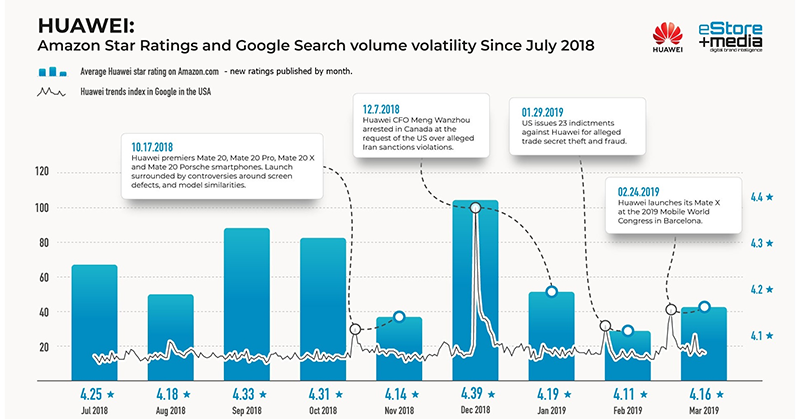 Reaffirming the adage that there is no such thing as bad publicity Huawei founder and CEO Ren Zhengfei recently thanked the US administration for highlighting its concerns around 5G, saying the controversy had helped create interest in the next generation broadband technology.

The debate also seems to be driving consumer interest in Huawei’s mobile handsets, according to eStoreMedia’s analysis of Google search trends and consumer ratings on Amazon. Over the past nine months, when the Chinese phone maker faced increased criticism from US, European, and Australian authorities, Huawei smartphones maintained a significant level of popularity on the US’s dominant e-commerce retailer - get the infographic here.

The average score of new ratings for Huawei phone products on Amazon has fluctuated, but remained strong since July 2018. The average rating of new reviews was 4.25 out of five in July last year, and fell back to 4.18 in August, around the time the Australian government banned Huawei and ZTE from providing 5G technology for the country's wireless networks. By September however, the value of new ratings was back up to a healthy 4.33 on average.

The average score of new ratings peaked at 4.39 in December 2018, falling back to 4.16 in March 2019, a decline of just over two percent since July. The rating scores seem to show a pattern of decline in the month after the release of negative news, followed by recovery the following month.

Over the same period, the Google Trend Index** for “Huawei” increased from 33 at the start of July 2018, to 52 at the end of March 2019 – indicating average search volumes for the brand are up by close to 60% in the nine months. There were a number of peaks in search activity over the period, but the underlying search volume has gone up consistently.

The Google Trend Index spikes correlated with news events including the launch of new products, and Huawei coming under the spotlight of government investigations. The biggest spike in December was linked with the arrest of the company’s CFO, Meng Wangzhou, in Canada on foot of a US warrant.

The brand also improved it’s Google search volume after it released a slew of new products in October 2018, at the end of January 2019 when the US Government announced 23 indictments against Huawei, and it got an even bigger bounce in February 2019 with the release of its Mate X product at Mobile World in Barcelona.

On March 29th the Chinese phone maker reported a 25% increase in profits for 2018 to 59.3 billion CNY, or $8.84 billion. The main growth came from the company’s consumer smartphone business, which was up 45.1 per cent year-on-year.

Want to know how your brands are performing in terms of Ratings & Reviews on relevant online retailers? Contact the eStoreLabs team at eStoreMedia.

**Google Trends is a search trends index that shows how frequently a given search term is entered into Google’s search engine.